At first glance you’d believe that these two things have little to nothing in common. I mean, how does the runway and clothing accessories have anything to do with a dystopian future and a technology driven society. However, high-end fashion and high-tech dystopia have more correlation than one might think.

Before delving into the styles and clothes that have come out of the cyberpunk subgenre we must first define what it is. In short, cyberpunk is a science fiction subgenre that is heavily surrounded by the concept of a lawless society and places a huge focal point on technology being integrated into society wherever and however it can. Interestingly enough though, many depictions of cyberpunk societies in video games such as Cyberpunk 2077 and Blade Runner portray a cyberpunk world as technologically advanced yet incredibly rundown, with cars that fly and hover over streets that resemble a deserted warzone. This juxtaposition is an incredibly interesting way of showing how these mediums believe a cyberpunk society would look and makes it significantly more memorable in the minds of the viewers than the typical depiction that shows a futuristic society with high-rise towers and clean, open city landscapes.

So in terms of fashion, how do these two concepts intertwine? Well you might be wearing a piece of it right now. That smartwatch that currently sits upon your wrist is a form of wearable technology, a trait commonly associated with the cyberpunk sub-genre. However this is a pretty tame example. Things tend to get more cyberpunk-esque when we begin delving into the high-end fashion side of things.

In 2006, Balenciaga’s Ready-to Wear runway featured a futuristic theme, one that fashion designer Nicolas Ghesquière described as being based off of “robotic articulation. Car parts. Droids”. This showcase of outfits featured long black trench coats, futuristic shades and golden boots that resembled limbs of a golden robot, all these looks that strutted down the runaway would pass as being taken straight out of the matrix film or any cyberpunk flick for that matter. 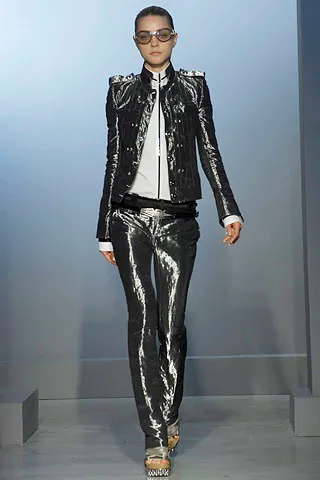 Unsurprisingly, this isn’t the only time that Balenciaga has incorporated the cyberpunk sub-genre into their fashion. 18 years later and the high-end fashion label tapped into the metaverse and the cyberpunk style.

In a video directed by Danish artist Yilmaz Sen for their Spring 2022 campaign models can be seen strutting from room to room rocking outfits that seem to be pulled straight out of Cyberpunk film Bladerunner as well as Neo’s closet. Large leather trench coats followed by big red gowns that look like futuristic flying saucers are all worn by the models as they flaunt the fits that will headline the Spring 2022 collection.

Balenciaga’s social media then posted an array of looks that leaned a step further into the cyberpunk style, featuring wildy elaborate headpieces that parallel those of a high-tech piece of machinery. These styles were created by Demna Gvasalia in collaboration with a Japanese artist known as Hiroto Ikeuchi who is renowned for her pieces of art that resemble this heavy machinery and high-tech designs.

The influence that the fashion world has drawn from the cyberpunk sub-genre is undeniable, allowing for some of the biggest fashion labels in the world to create and display some of the most interesting and experimental pieces of clothing ever displayed on the runway. The way that artists and designers alike have been able to draw inspiration from films such as the Matrix and Bladerunner to create fashion pieces that encapsulate the cyberpunk styles and traits are nothing short of interesting and creative. Cybercemetic masks, long leather trench coats and thick visors, all of these pieces of fashion have roots planted within the Cyberpunk subgenre.

One of the world’s biggest celebrities and fashion icon Ye, (formerly known as Kanye West) has also been seen rocking some styles that could be taken straight out of a cyberpunk movie. The rap superstar has made unique masks that cover the entirety of his face a staple in his collection. Straight out of a movie like Ridley Scott’s Alien, Ye dons a thick black mask as he moves through the streets of Los Angeles and can be spotted in thick black Balenciaga boots and an oversized, shiny, black puffer jacket. His trademark style is unique and can be drawn back to the futuristic, gothic style of clothing that a lot of films such as Johnny Mnemonic and the Matrix popularised.

So with these examples it is incredibly evident to see the impact that cyberpunk films and culture has had on fashion as a whole. From techwear to the futuristic style of clothing that can be seen in so many facets of the subgenre, fashion and cyberpunk culture really do relate and have had major influences on eachother.